The Crown Bridges project will connect the Laajasalo, Korkeasaari and Kalasatama areas to the centre of the city by means of a 10 km light rail line. In addition, as part of this project, a new scenic seaside walking and bicycling path will also be created.

Construction work will begin at the earliest in 2021. The preliminary goal is to have the light rail connection operational in 2026. Once approved, a detailed construction schedule with district-specific details will be published on this page.

The Crown Bridges project will be implemented as a combination of two types of contract: the two bridges connecting Kalasatama and Kruunuvuorenranta and the construction of earth structures at Helsinki Zoo on the Korkeasaari island will constitute a lump-sum contract, and other construction work will be carried out in compliance with the alliance model.

Other earth construction, street construction and municipal engineering works along the connection will also be included in the alliance. One such work is the construction of the new Hakaniemensilta (bridge in Hakaniemi) and the demolition of the old bridge. 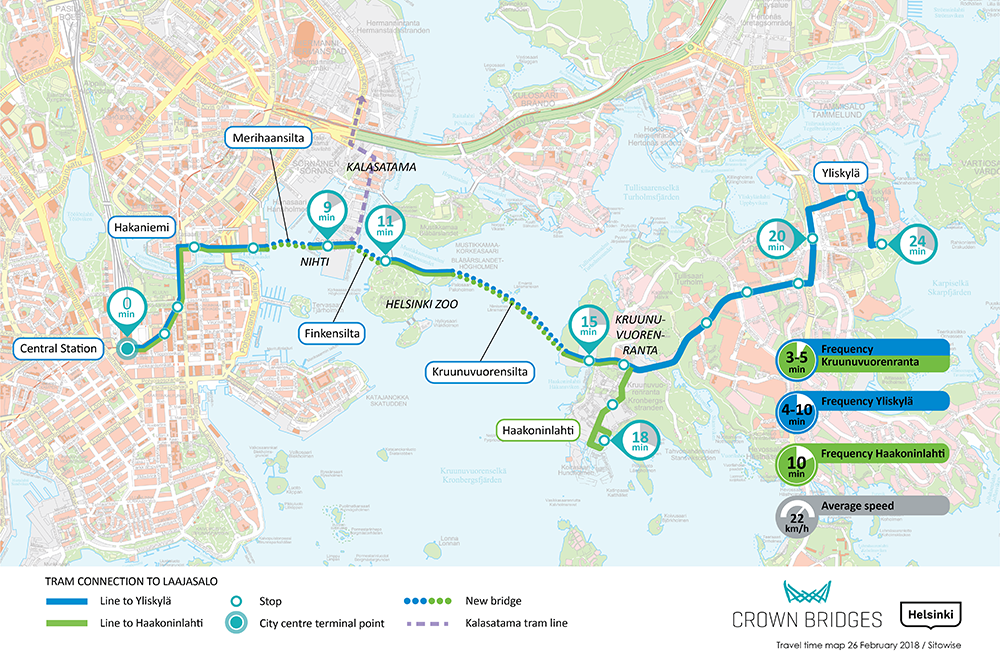 The primary objective of the Crown Bridges project is to provide a quick and reliable transport connection from the growing Laajasalo area to the centre of the city.

The Crown Bridges light rail connection will ensure smooth traffic both inside and in and out of Laajasalo during a period which will see the area's population more than double thanks to the completion of a wholly new residential district, Kruunuvuorenranta, and considerable infill development. The project will also enable significantly improved transport connections to and from Korkeasaari.

A direct light rail connection between the city centre and Laajasalo will also decrease the congestion projected for the eastern branches of the metro system.

In addition to the light rail connection, the Crown Bridges project will also make the Kalasatama, Korkeasaari, Mustikkamaa and Laajasalo areas accessible by bicycle or on foot, as the light rail line will be bordered by a high-quality bicycle route/walkway.

Thanks to the project, the shortest way from Kruunuvuorenranta to the Central Railway Station, which is currently 11 km and runs via Itäväylä, will decrease to just 5.5 km.

A decision to implement the project was reached by Helsinki City Council in August of 2016.

In 2011–2013, the city organised the Kalasatama–Kruunuvuorenranta transport connection design competition.

Out of an initial 52 applications, 10 work groups were chosen for the competition proper. Once the dust had settled, first prize went to Gemma Regalis, a proposal designed by WSP Finland Ltd and Knight Architects Ltd.

The competition's jury was specifically looking for a solution that would best suit the area's demanding landscape and take into account its rich cultural history. The jury paid special attention to the usability and durability aspects and aesthetic qualities of each proposal.

The transport connection had already been included in the general plan of 2002, while a City Council decision reached in 2008 added specifications which mandated its development as a light rail connection.

A broad range of options aimed at connecting the centre and Laajasalo by means of quick public transport has been considered over the years. A light rail running on multiple bridges emerged as the solution that best achieves the project's goals.