Description:
Fredrik Pacius (1809-1891) was a German-born violinist and composer who was invited in 1835 from Stockholm to teach music at the University of Helsinki. In fact, he came to spend the rest of his life in Finland and played a key role in the development of Finnish music. He composed the first Finnish opera `The Hunt of King Charles', based on Zacharias Topelius' libretto, in 1852 and other orchestral and ceremonial music. His merits in introducing European music to Helsinki and as a music teacher were considerable. However, he is best known as the composer of Runeberg's poem `Maamme' (This land of ours). The song was first performed by students in May 1848, and after receiving Finnish lyrics, translated by Paavo Cajander in the 1890s, it was adopted by all Finns and became the Finnish national anthem.

Emil Wikström's memorial to Pacius was unveiled in the Kaisaniemi park in 1895. The work is a realistic bust set on a granite pedestal. The work of art belongs to the collection of HAM Helsinki Art Museum. 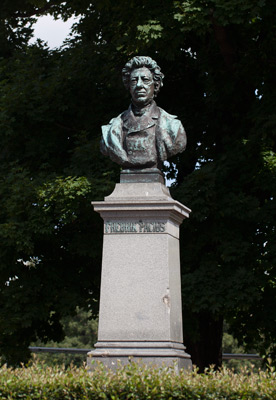